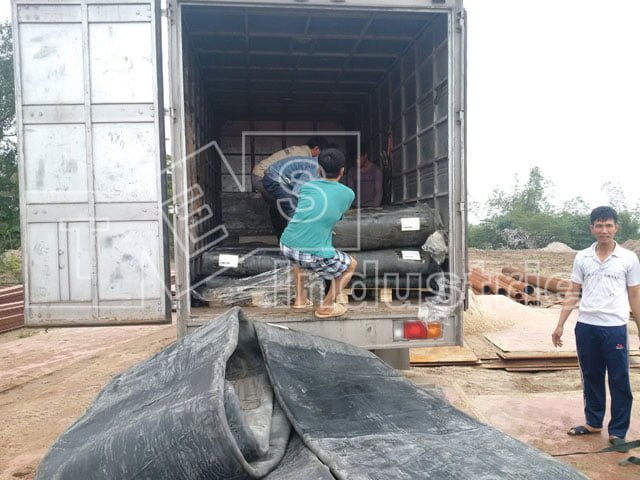 Launch airbags also known as rolling bags or launching roller balls are made of large elastic bearing synthetic braided fibers, inside and outside are covered with rubber and form a long glossy cylindrical shape. Steam bags are often used in launching for dry cargo ships, tankers, trailers, barge, ships, ships, ferries, other vessels, named (AHTS, DSV) and many other uses. The largest vessel can be launched by launch air balloons with a weight of up to 85,000 DWT.

Launching ships on the surface of the launched rubber ball is actually an improvement in shipbuilding technology compared to the launch by traditional styles. Airbag launching is increasingly widely applied in many shipyards around the world, bringing time-saving benefits, saving investment, flexibility and safety.

Rubber air balloons have a structure consisting of an outer rubber layer, many layers of synthetic tire fibers overlap and in the same is a solid flowing rubber layer. The launched rubber bag is a cylindrical vapor ball, with two conical heads and the end of which is the mouth of the bag. The mouth of the bag is equipped with pumping tools and sealing the bag.

The rubber layer outside the air balloon protects the synthetic braided layers from abrasion and other external forces. This combination creates high durability to withstand all the most difficult and harsh conditions.