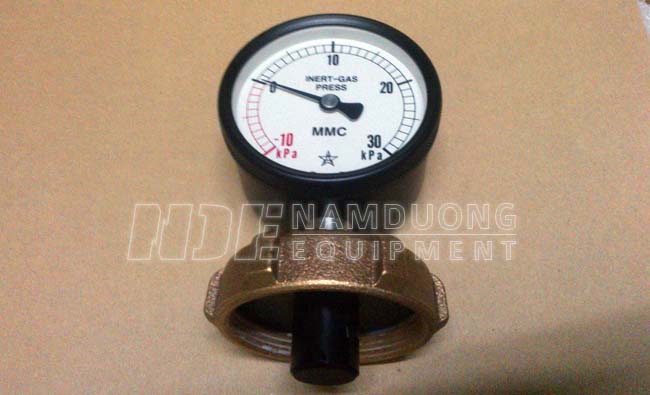 Inert gas pressure gauge at the bottom of the cargo tunnel: According to the IMO regulations on oil tanker safety and prevention of environmental pollution, “during the washing time of the cargo tunnel, the air pressure in the aviation tunnel is positive, the washing must stop until the conditions allow to continue”, so MMC launched the Gas-inner gas pressure meter Model GVP-75 to control the pressure in the cargo. The watch is mounted on an airtight valve installed on the deck surface.

Dryness testing equipment at the bottom of the basement: Also in accordance with the IMO’s regulations on Cargo Safety and Prevention of Marine Environmental Pollution stipulates that “Vessels must be equipped with dry equipment for the bottom dryness checking device model D’CHK-F manufactured for the above purpose.

Inert gas pressure gauge at the bottom of the cargo tunnel:

Depending on the type of airtight valve installed on board, there are different models in the GVP-75 Series, namely GVP-75, GVP-75A, GVP-75NF and others to suit tanktech or Honeywell Tanksystem airtight valves, the watches all have pressure bands: -10kPa (vacuum) ~ +30kPa (pressure)

Dryness testing equipment at the bottom of the basement:

As well as the above pressure clock, the drying tester at the bottom of the basement also has many models for many different valves such as: