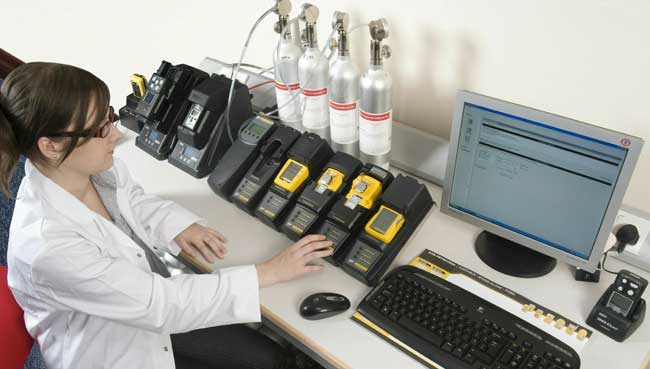 The storage and maintenance of gas concentration detectors to ensure they always work in the best way, giving the most accurate measurements is always a difficult task, especially in giving a specific time to calibration equipment. Calibration of the gas detector is actually not so difficult and takes time as we think, we just need to press a few buttons and take a few minutes to wait, the machine will proceed completely automatically. However, giving a calibration cycle is a challenge for all customers in the midst of too many tasks, work also requires us to pay attention. While our working day is becoming increasingly busy and it is difficult to find the right time to stop things, check and correct a toxic gas measuring device, things that we sometimes find that it does not bring the effect that we can see immediately.

Manufacturers of gas detectors always recommend that, before each use, we should conduct a functional test for gas detectors (also known as bump tests), to ensure that the device is operating correctly, responding well to signs of insecurity associated with toxic gases. However, there is currently not really true information that manufacturers make recommendations on the maintenance and preservation of gas concentration detectors is not really necessary, and it is just a trick, a trick to sell calibration gases.

The popularity of these rumors is now ingrained and with the introduction of some suppliers of multi-norm gas detectors with infrared sensor technology for detecting flammable gases, low energy consumption, so the device can work continuously for 2 years without having to be calibration. However, there is a fact that other toxic gas detection sensors, such as CO, H2S are still using electrolyced sensor technology, so why don’t they need calibration, when it is still the old technology. So should we change the recommendations for the storage and maintenance of toxic gas detectors?

The recommendations of gas detector manufacturers are based on many factors, one of which is that the gas sensor after a while will have a benchmark drift. The standard drift of the sensor is a natural trend in the process of operation over time, which is an indisputable element of electrolyced sensor technology.

In September 2013, OSHA published a journal titled: Performance and Checking the Readable Value of Handheld Gas Meters. In this journal, OHSA pointed out 9 factors that contribute to the sensor drifting benchmarks, 7 of which are related to electrolyzed sensors.

The third factor is the standard drift of the sensor specially defined by manufacturers. Accordingly, the sensors will self-impair accuracy in the range of 2% ~ 5% per month. In other words, a sensor initially detects 100ppm of gas, after a month it can only read the same value but only gives a reading of 95ppm or less, ignoring other elements of the environment. The specifications of the sensors are based on those in the laboratory, however they will work less effectively than the parameters given if they are always subjected to the harsh effects of the environment.

To be able to understand the problem in a simpler way, we are going to look at a specific example, ignoring all the other reasons that are related to the drifting of the sensor’s benchmarks, including the 7 factors already listed above as well as the immediate effects , suddenness of the environment and humidity. In the two charts below, let’s assume the sensor’s benchmark drift is 2% per month, and the sensors here are CO and H2S, with standard concentrations of 100ppm and 25ppm. After 24 months, the sensors will read a value lower than 38% and after 48 months, the readable result will be 62% lower. In other words, after 2 years an initial device exposed to 10ppm CO and 25ppm H2S can only display 62ppm of CO and 15.4ppm of H2S. After a period of 4 years, the corresponding values are 38ppm CO and 9.5ppm H2S. That is not to mention many other factors that affect the accuracy of the sensor. After a period of 4 years, with standard alarm points, the machine may no longer activate a low alarm level.

Another stream of opinions, which also caused controversy about the need for daily gas detector calibration, was the use of a functional test (also known as bump test) to confirm the performance of the sensor. A functional test, basically designed to ensure that the device has a response to the gas it needs to measure, i.e. giving indicators of that gas when it is present in the measuring environment, it is not an option to confirm the accuracy of the measurement. A common standard for determining a gas detector that passes a bump test is that it needs to detect 50% of the calibration gas concentration when in contact with the device. In the ationed examples, the device needs to detect 50ppm of CO and 17.5ppm H2S. After only 34 months, the sensor will drift to the benchmark itself and the device will no longer pass the bump test. Bump test is an effective tool but is never seen as an alternative to calibration.

Another to ensure the correct operation of the gas detector and reduce the complexity of storage and maintenance is the use of a docking station or calibration station. These devices will automate functional and calibration testing, plus it can load data simultaneously, can upgrade, install devices, and most importantly allow you to focus on the necessary work.

While no one has yet asserted that regular calibration of equipment is a nuisance and unnecessary, we should consider it a really important thing. The above examples have described that not being regularly calibration will cause the gas detector to no longer be accurate over time. Gas detectors are devices for safety, so if you are in possession of these devices, do not give misinformation or because a few minutes of calibration but receive measurements with inaccurate measurement results , affecting the safety of the user’s own life.