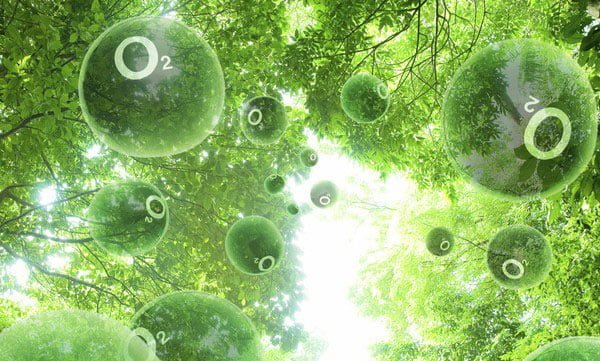 Inhale … exhale… The 8th element in the Table of Chemical Cruisers is a colorless gas, which accounts for 21% of the Earth’s atmosphere. Since it is everywhere, oxygen is very susceptible to “disregard”. In fact, oxygen is the most repro reaction element among non-metallic elements.

How is oxygen detected?

According to the Thomas Jefferson National Accelerator Facility of america, oxygen is the third most common element in the universe. However, the activity of oxygen makes it quite rare in the Earth’s atmosphere.

Cyanobacteria are organisms that “breathe” with photosynthesis, they inhale carbon dioxide and emit oxygen, like plants. Cyanobacteria is considered the first organism to produce oxygen on Earth. This is considered a great Oxidation Event in history.

The photoathesis of the obacter takes place continuously before oxygen appears throughout the Earth’s atmosphere. A March 2014 study published in the journal Nature Geoscience found 2.95 billion-year-old stones found in South Africa contained oxides. The rocks were originally located in shallow waters, showing that oxygen from photoethralized began to accumulate in the marine environment about half a billion years ago when it began to accumulate in the atmosphere about 2.5 billion years ago.

Life today depends a lot on oxygen, but initially, the accumulation of oxygen in the atmosphere is no different from a disaster. The new atmosphere caused a series of anesthrabic bacteria to go extinct, including those that did not need oxygen. The anerobic bacteria that could not adapt or survive when oxygen was killed in today’s new world.

The first vague human notions of the existence of oxygen as a chemical element were in 1608, when the Dutch invention Cornelius Drebbel reported that nitrate heating (potassium nitrate) released a gas. The identity of the gas remained a mystery until the 1770s, when three chemical scientists almost discovered oxygen at the same time. The British pastor and chemical scientist Joseph separated oxygen by shining sunlight on mercury oxide and collecting gas from the reaction. He noted that a candle burns brighter when in this gas, thanks to the role of oxygen in combustion.

In 1774, the priest announced his discovery. Earlier, in 1771, the Swiss scientist Carl Wilhelm Steele was the one who actually separated oxygen and had written about oxygen gas but did not publish the work. The third person to discover oxygen was Antoine-Laurent de Lavoisier, a French chemical scientist. He himself named the element “oxygen”. The words “oxygen” and “gene” are both Greek words, meaning “acid-forming”.

In March 2014, physics scientist Dean Lee of the University of North Carolina and colleagues reported that they had found the nuclear structure of oxygen-16, the most common isths of oxygen, in the basic state (the state in which all electrons are at the lowest possible energy level) and in the first state of stimulation (the next state of energy level increase).

The above discovery is important for understanding how cashews form in stars – from carbon with oxygen to heavier elements. Using simulations on super-computers and some crystal networks, the researchers were able to see how particles in an oxygen-16 cashew sort themselves. They noticed in the basic state of oxygen-16, there are actually four alpha clusters, neatly arranged in a quadrilateral mass.

But there is another secret to unraveling. The basic state of oxygen-16 and the first stimulus state together have an unusual feature. Both have the same spin – spin is the value that in turns how the particles rotate. They also have a positive balance, a way of showing symmetry.

The simulations gave the answer: In a state of stimulation, oxygen-16 rearranges its 3 parts to look like the basic state. Instead of a quadrilateral arrangement, alpha particles arrange themselves in a square plane or almost like a square. Currently, science is still exploring solar interactions in oxygen-16 33 33.

Lee’s research aims to learn how oxygen is born in stars. In addition, there is another form of oxygen research, which focuses on the role of oxygen in life on Earth. Immediately after the Great Oxidation Event 2.4 billion years ago, oxygen concentrations may have reached or exceeded today’s concentrations. Many species of animals have been extinct since then, the simplest animals appeared about 600 million years ago.

Although in theory the appearance of oxygen has paves the way for the existence of animals, the story seems to be much more complicated. The animals did not appear after the first significant collisions in oxygen concentrations on Earth 2.4 billion years ago. In February 2014, Daniel Mills, a doctoral candidate at the Nordic Center for Earth Evolution at southern Denmark University, along with his associates reported in the journal PNAS that modern sponges today are still able to breathe, eat and even grow at oxygen concentrations higher than 0.5% to 4% of oxygen levels in the Earth’s atmosphere today. Sponges are probably animals that live in the same way as the first animals on Earth.

The above discovery of the sponge species shows an additional aspect of the life of the first animals on earth. Even in modern times, animals such as roundworms thrive in oxygen-deprived areas of the ocean.

“It’s clear that there are many factors that contribute to the evolution of animals, not just oxygen,” Mills said.

According to The Investment Forum Newspaper