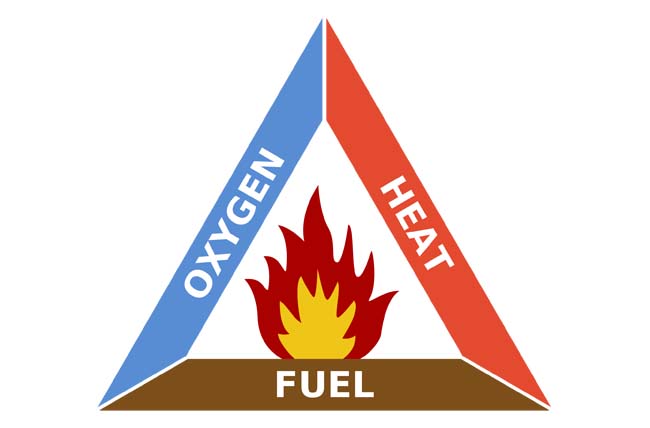 To be able to burn gas, there must be a source of fire, usually a spark (or flame or hot surface) and oxygen. In order for the fire to occur, the concentration of gas or vapor in the air must be set to a degree to become ‘fuel’ and oxygen can cause a chemical reaction. The energy of the explosion depends on the ‘fuel’ and its concentration in the atmosphere. The relationship between fuel/air/spark is illustrated in the ‘Fire Triangle’.

The concept of ‘Fire Tetrahedron’ was introduced recently to illustrate the fire hazards maintained due to chemical reactions. With most types of fire, the original fire triangle model works well – removing an element of the triangle (fuel, oxygen or ignition source) will prevent a fire from occurring. However, when the fire is related to metals such as lithium or magnesium, using water to extinguish the fire can lead to it becoming hotter or even exploding. This is because these metals can react with water in an radiating reaction to produce flammable hydrogen gas.

LEL levels are defined in the following standards: ISO10156, and IEC60079. ISO standard lists of ‘root’ LELs are obtained when the gas is in a static state. LELs are listed in the EN and IEC standards obtained with a stirring gas mixture; this result in lower LEL in some cases (e.g., some gases have been proven to evaporate a lot during movement).

The flammable gas detector detects flammable gases in oxygen environments according to LEL concentrations with a range in %LEL, thereby giving the necessary warnings to ensure safety indicators in fire prevention and fighting. However, the measurement of explosive gases in the oxygen environment should refer to the actual oxygen concentration in the measured environment, which is why it is recommended to use an additional oxygen meter to make the results of gas leak detection more accurate. For the convenience of measuring both gas indicators at the same time, the most optimal option is to use a multi-target gas detector, which can simultaneously measure explosive gases, oxygen and toxic gases.