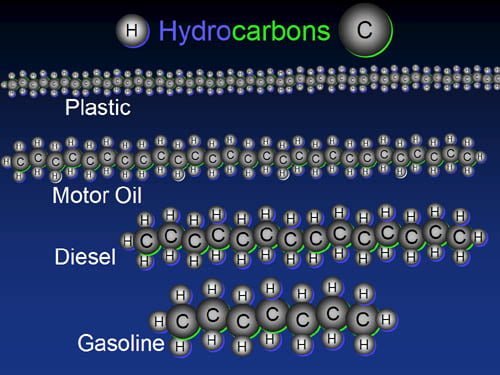 Most organic chemical compounds will burn. Combustion is a simple chemical reaction in which oxygen from the air reacts rapidly with a substance, creating heat. Simple organic compounds such as hydrocarbons and these are the main components of crude oil/gas. These compounds are made up of carbon and hydrogen, hydrocarbons are simply methane, each of which consists of one carbon atom and four hydrogen atoms. It is the first compound in the family called alkane. The physical properties transform alkanes with an increase in the number of carbon atoms in the molecule, those with inertals from carbon1-4 are gases, those with 5-10 are volatile liquids, those with 11-18 are heavy fuel oils and those with 19-40 are lubricants. Long-chain hydrocarbons are tar and wax. The first ten alkanes are:

Alkenes are similar but their molecular structures are double-linked (e.g. ethylene and propylene). Ankin contains triple link (e.g. acetylene). The above compounds are called fats. Aromatic hydrocarbons such as benzene have a ring molecular structure and when burned for a smoke-haunted flame. When hydrocarbons burn they react with oxygen from the atmosphere to produce carbon dioxide and water (but if burned not entirely due to insufficient oxygen, the result will be carbon monoxide). Many complex organic compounds contain components such as oxygen, nitrogen, sulfur, chlorine, bromine or fluorine, and if burned, the combustion products will include other compounds. For example, sulfur-containing substances such as oil or coal will result in sulfur dioxide while chlorine-containing substances such as methyl chloride or polyvinyl chloride (PVC) will result in hydrogen chloride. In most industrial environments, where there is a risk of fire or explosion due to the presence of flammable gases or vapors, a mixture of compounds can also be encountered (such as a mixture of volatile organic voc substances).In the raw material petrochemical industry is a mixture of chemical substances, which are mostly natural decomposition or are changed through stages. Crude oil, for example, is separated into a variety of materials using processes known as distillation (or fractions distillation) and ‘cracking’. A number of other substances are also born.

In order to prevent explosions during shutdown and operational maintenance in many industrial processes using a process called “inerting”. For example, nitrogen can be used for exclusion (e.g., an inert gas supply system for a fuel tanker’s bunker, or a storage tank on a tanker) of hydrocarbons before maintenance or repair. Before technicians enter those areas for work, that area will again be pumped with air.Crowcon has special equipment to monitor this process to ensure efficiency in “inerting” and warns of the presence of potentially hazardous mixtures in the air, nitrogen and hydrocarbons during maintenance operations.

The safety procedure is usually associated with the detection of flammable gas before it reaches its lower explosive limit. There are two commonly used standards which determine the concentration of ‘LEL’ for flammable substances: ISO10156 (also referenced in alternative EN50054 standards), and IEC60079-20:2000 (also referenced in BS EN61779-1:2000). IEC (International Electro-Engineering Commission) is a worldwide organization of standards. Previously, the level of flax was determined by a single standard: ISO10156 (Gas and gas mixtures – Determination of fire capacity and oxidation capacity for selection of cylinder valve doors).

The table below shows some notable differences in LEL values between the two standards. It can clearly be seen that 50% of the methane LEL in EN61779 is calculated to have a volume concentration of 2.2% in the air, completely different from the volume of 2.5% as stated in ISO10156. Therefore, if a detector tuned to EN61779 uses a mixture of 50% LEL methane in accordance with ISO 10156, a 13.6% error will occur and the likelihood of having to cancel the validity of the calibration. The errors may be even greater for non-linear infrared detectors.

In accordance with ATEX- European guidelines (including certifications and use of devices in a flammable material environment), it is specified that manufacturers and users comply with EN61779 standards. The Crowcon policy is aimed at following new European and territorial LEL standards that comply with European standards. However, as the old standard is still used in the US and other markets, we will continue to tailor the gas detector to ISO 10156 in the required territories. ATEX / IECEX certification of Crowcon products will be provided with calibration according to IEC60079 / EN61779 (i.e. methane gas sensor will be adjusted so that 100% LEL = 4.4% volume). UL/CSA certification will be tested in accordance with ISO10156 (i.e. the methane sensor will be adjusted so that 100% LEL = 5% volume), unless another customer has other regulations.

The flammable gas detection system is designed to generate pre-gas/vapor alarms that reach explosive concentrations. Usually the first level of alarm is set at 20% LEL (although there are industries that prefer to set at 10% LEL; especially in the Oil and Gas sector). The second and third alarm levels vary by industry and application sector, but are usually set to 40% LEL and 100% LEL respectively.